Wall Street Journal Deal of the Week: Luxury House ‘Flippers’ Get a Lift

Nick Sinatra, the owner of a small real-estate investment firm, believes he has found the next big opportunity in the housing market: renovating and flipping million-dollar properties.

Well-heeled investors think Mr. Sinatra is on to something. On Wednesday his company, American Coastal Properties LLC, is set to announce that it has received $50 million from private-equity firm Colony Capital LLC and the Pritzker/Vlock Family Office. While the investment is relatively small for Colony, it could allow ACP to double the number of homes is renovates annually.

The investment by Colony in a boutique firm like ACP is the latest example of how big money is chasing returns in a corner of the housing market typically dominated by mom-and-pop shops. 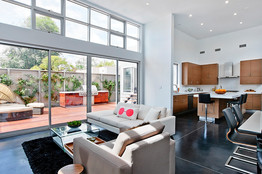 Initially after the housing crash in 2009, investors focused on fishing out foreclosed and other distressed properties on the cheap, with an eye toward renting out those homes or flipping them for a quick profit. But that trade has come under pressure as foreclosures have fallen and as competition has picked up. Now some companies are focusing on flipping expensive properties amid a housing-market rebound that has been driven, in part, by limited listings of homes for sale, particularly in California.

Unlike the “flippers” of the housing bubble, who bought homes with little or no money down, those investors today often have to make all-cash purchases, which has reduced the pool of potential buyers.

ACP focuses on buying homes with “lot value”—that is, properties that currently have little curb appeal but that are located in exclusive neighborhoods such as Los Angeles’s Venice Beach or La Jolla, Calif. They spend between 50% to 100% of the purchase price—hundreds of thousands of dollars—to gut, redesign and rebuild the home.

ACP hopes to fetch nearly $2 million for a four-bedroom gem it bought out of foreclosure for $720,000 last year in San Diego’s historic Cortez Hill district. The home, which features a landscaped courtyard and views of the ocean and the Coronado Bridge, received a top-to-bottom makeover.

Finding properties to buy is a challenge, especially as the inventory of bank-owned properties and traditional listings have plunged over the past year. “We’re literally knocking on doors,” Mr. Sinatra says. Before getting into the real-estate business five years ago, Mr. Sinatra worked as a political director for President George W. Bush.

For Colony, the investment is the latest sign of its bullishness on the U.S. housing recovery. Its investment in ACP is separate from its own home-rental unit, Colony American Homes, which has spent more than $2 billion since 2012 to acquire some 15,500 homes in markets across the U.S.

Flipping luxury homes is a much smaller slice of the market, but Mr. Sinatra says it offers better returns because the market for buying less-expensive homes as either rentals or flips has grown “overcrowded.”

“There are fewer competitors in this space because it’s more difficult,” he says.

Over the past year, the number of homes in California that have been flipped—bought or resold within six months—has reached its highest levels since late 2005, according to PropertyRadar, a real-estate data firm. Nearly 12,400 homes have been flipped statewide this year through August, up by more than one third from a year earlier.

Losing bidding wars to flippers offering all cash has frustrated owner-occupant buyers, but investors say they often are taking on projects that ordinary buyers aren’t able to touch. “We buy product that is so bad in regards to its condition that a bank won’t finance it, but it’s not so bad that you have to take a bulldozer to it,” said Bruce Bartlett, managing partner at Sequoia Real Estate Partners, a private-equity firm in Los Angeles.

Mr. Bartlett’s company has raised a $4.5 million fund that allows him to work on about seven homes at a time. Most of his investment money is “very old school—doctors, lawyers, family trusts,” and he says he has outperformed his promised 12% returns.

His firm has just finished renovating a Rancho Palos Verdes, Calif., home that he hopes to sell for about $1.43 million. He paid $850,000 for it earlier this year after the longtime owner died and his wife moved. Mr. Bartlett heard about the home from a friend and convinced the owner’s children to sell.

Mr. Bartlett replaced everything—the roof, plumbing, electrical system, heating and air-conditioning systems—and changed the 1960s floor-plan for the kitchen and the master bedroom. The renovation, which also included technology upgrades, a firepit, spa, and 70-inch TV screens, cost about $220,000. “You name it. We replaced it,” he says.

Write to Nick Timiraos at nick.timiraos@wsj.com

This article originally appeared at www.wsj.com on October 9, 2013.

Posted on October 9, 2013 in American Coastal Properties, In the News